This article first appeared in the Rushville Republican on October 18, 2016. 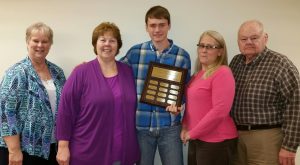 In 2013, the Rush Memorial Hospital Foundation created an award to recognize outstanding philanthropy being accomplished by our community’s youth. The Rush County Youth Volunteer of the Year Award is presented annually to an exceptional youth, age 6 years to 18 years, who demonstrates good throughout their neighborhood. Their philanthropy can be shown by volunteering, fundraising for a cause or community service.

The first Rush County Youth Volunteer of the Year Award was given to David Wood, followed by Jessica Miller and Ethan Duncan. The award consists of having the recipient’s name engraved on a permanent plaque displayed by the Imaging Department at Rush Memorial Hospital. The winner also receives $300 from RMH.

Nominations can come by way of family, neighbors, community leaders, organization leaders, churches, even friends. A simple nomination form must be filled out and accompanied by two letters of verification of the nominee’s philanthropy. The nominee must be a Rush County resident and the philanthropy must have occurred in the past 12 months. The deadline for submission of the nomination form is 4 p.m. Friday, Oct. 28 to the Rush Memorial Hospital Foundation Office which is located on the corner of 13th Street and Main Street, Rushville.

The 2016 winner will be notified in early November and will receive their award at the RMH Foundation’s Seed Circle Anniversary Celebration on Thursday, Nov. 10.

“The act of philanthropy, or giving of one’s self, time, and/or talents, is a noble cause for the betterment of mankind,” RMHF Director Faith Mock said.

RMHF Board member and RMHF Seed Circle member Eleanor Columbe said, “We are thrilled to showcase the good that our young people are doing in this community. They are great kids doing amazing good right here in Rush County.”

Nomination forms may be picked up at the Rush Memorial Hospital Foundation or call the RMHF at 7675-932-7568 with an email address to have a nomination form sent to you.